Many of you have probably already seen this either on Cruising World magazine’s site or on our YouTube channel, but here is Episode 1 of our Arctic Voyage video series!

In it, the story begins in the storm-tossed Aleutian Islands in June of 2015. The year before, we sailed Celeste from Washington State to Dutch Harbor of “Deadliest Catch” fame but sadly didn’t take any video footage. So in this video we’re back after a winter’s work to re-commission her – think scuba-diving in the Bering Sea – explore the tundra-covered mountains of the island, and get ready for the Arctic.

Stay tuned for Episode 2 on both Cruising World‘s site and on YouTube – it’ll cover our first Bering Sea passage and the wildlife-rich Pribilof Islands!

We’ve been doing a little renovation to Gone Floatabout and added some new pages. Finally the Arctic Voyage tab now has a full account of the voyage, from our first shakedown cruise in British Columbia in 2013 to our rounding of Point Barrow and return to the Aleutians this past summer. If you’re really ambitious and or really bored, all the posts are in order now on the 2014: Alaska page and the 2015: Arctic page 🙂

Much more exciting is that we finally did something about the Photography page! It’s now under the new Media tab and has three extensive galleries: Wildlife, Nature, and Adventure & People. We had a lot of fun putting that together, so hope you enjoy it!

Finally, sorry for the last post that got sent out – it was a snafu that happened when we were editing our home page.

Hope everyone enjoys floating about the revamped site 🙂 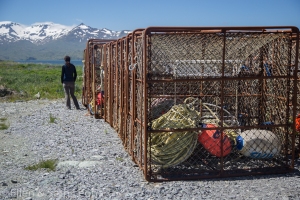 While our boat projects have taken up most of our time since arrival on Unalaska, we’ve made time to enjoy this beautiful island as well! Even chores like driving to the grocery store or Port Office take us past stunning vistas of green, tundra-covered mountains, several still dusted in snow. On sunny days, when the island holds the fog bank at bay just offshore, the sea is a brilliant blue, the perfect counterpoint to the vivid green hills. Here are a few photos just from around our boat, the port area, and our friends’ house: END_OF_DOCUMENT_TOKEN_TO_BE_REPLACED

Seth and I got started on our planned projects/upgrades to Celeste the morning after our arrival. We’d gotten most of our stuff aboard the evening before and had stowed as much of it as we could before getting too tired and hungry to continue around 9:30, six hours after we’d landed. END_OF_DOCUMENT_TOKEN_TO_BE_REPLACED

We were lucky with the weather on our flight to Dutch Harbor. Not only did we essentially have a 3 hour scenic flight along the way, but we actually got to land! Often the planes can’t get in on account of fog and bad visibility. We took off in Anchorage at 12:30 and soared over the Alaska Range and Cook Inlet, low enough to see crevasses in the glaciers. Seth and I both spent the first half of the flight staring out the window at the immense peaks. Then it went from mountains to muskeg and tundra, dotted everywhere with little lakes. We spotted King Salmon, where we had landed to fuel on our way out to Anchorage last year, and then the fog socked in, thick and impenetrable all over the Bering Sea. Thankfully Unalaska is a big enough island that it burns off the fog if the land heats up enough, so a few minutes before our descent, we saw clear skies and green hills. Some of the mountains were still snow-capped, and the green of the tundra was so vibrant and spring-like it looked almost fake. END_OF_DOCUMENT_TOKEN_TO_BE_REPLACED

Unalaska returned to its more normal state of cold, wind, and clouds after our hike and we went to work on the boat in earnest.  Andy and Daneen had very nicely offered to store all our junk in their attic, so we took everything off the boat.  The point of this on the inside was mostly to prevent mold from growing on the cushions, sails, books, woodwork, etc. and to keep stuff from freezing that probably shouldn’t freeze (like my dad’s Mason jars of soup, pasta sauces, etc.).  The point on deck was to prevent loose stuff from blowing away or getting stolen (like our Mantus anchors and extra propane cylinder).  This took a couple days and more than a couple truck loads. END_OF_DOCUMENT_TOKEN_TO_BE_REPLACED

Amazingly enough, the forecast for the next few days following our arrival in King Cove and late night with our new friends on the fishing boat was for clear skies and “light and variable” winds.  We could even take a day to explore the place before sailing the following morning (September 2) around 4AM.  That would time us perfectly for the tidal current in Akutan Pass, the pass into the Bering Sea which Francisco had recommended.