La Paz is quite a useful spot for cruising sailboats – a big anchorage, a bunch of marinas to choose from at different prices, almost any shop or service you might need. As the capital of Baja California Sur, it’s actually quite an extensive city but has a fairly relaxed atmosphere and a lovely waterfront area. 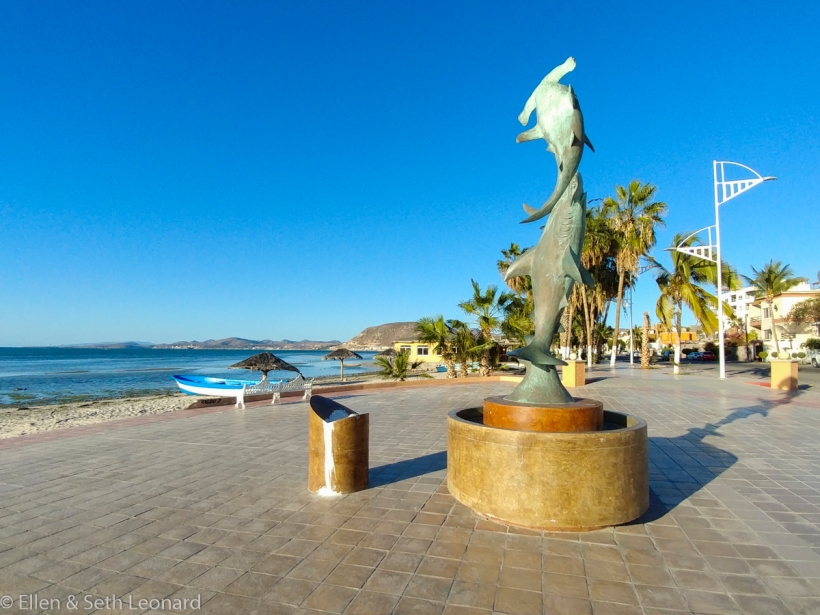 Statue on the La Paz Malecon

After Seth’s parents flew home, the two of us did a few small boat projects. The wiring to one of our solar panels was pretty well shot, so we took that panel off and soldered on new wires.

We also installed a big net to store our fresh fruit and vegetables. We do have a very small fridge, but we like to stock up on more fruit and veggies than fit in it. In the colder latitudes, we had simply stored the vegetables in bags in an open compartment just aft of the galley, but that area is too confined a space for the high temperatures of the tropics – the veggies need more air circulation to stay fresh in these latitudes – so a net of the sort we had had on HERETIC during our voyage around the world was most necessary!

I was also really excited to catch up with some friends from Alaska! We had met Marta and Travis on Baranof Island up at the northern end of Alaska’s Inside Passage in 2016. They’re from Juneau and were living aboard their boat in the marina there full-time, getting ready to make a sailing voyage to the South Pacific. We had hit it off right away and stayed in touch over the last couple of years. We’d been leap-frogging each other down the West Coast all autumn, but we finally connected in La Paz with dinner on each of our boats and a fun scramble through the desert above one of the beautiful beaches nearby.

Hiking near La Paz with our friends from Alaska

Seth, Ellen, Marta, and Travis on our hike (No, Seth didn’t go to UCLA – a friend who’s a professor there gave him the T-shirt!)

Me and a big cactus!

All too soon, it was time to put CELESTE to bed again – we had to go away for another couple of months to work. But we were looking forward to returning in the spring and seeing a bit more of the Sea of Cortez!

CELESTE’s home in La Paz during our time away working

(Once again, I scheduled this to come out while we’re sailing, so apologies in advance for not responding to comments sooner!)