Sailing out the Golden Gate, October 2017

Sailing out of San Francisco Bay, under the Golden Gate Bridge, was a much more relaxed experience than coming into the Bay in the fog and dark. We had sunshine, no ship traffic, and a light breeze – just enough to be able cut the engine and sail through this famous waterway.

The Golden Gate is an iconic strait in nautical history – it actually acquired its moniker prior to the California gold rush, because the strait was a departure (and return) point for the lucrative trade with Asia. I’d spent a fair amount of my childhood looking at it, and sailing under it, so it was a treat to sail my own boat out of it on a voyage to the South Pacific.

Trimming the jib to sail under the Golden Gate Bridge

Of course, we weren’t going directly to the South Pacific yet, but only making an overnight trip to Monterey Bay, less than 100 miles away. We’d timed our departure from San Francisco for late afternoon so that we would arrive in Monterey in the morning of the next day. It was an easy – boring – passage, just motoring through the calm. A couple of hours after sunrise, the barks of California sea lions were welcoming us to Monterey.

Monterey is best known for its large, excellent, and comprehensive aquarium, one of only two in the world with a kelp forest (the other is in Cape Town), and one of the few (the only other one I know of is in Miami) with a deep sea tank, large enough to encompass a huge sardine bait ball and several open ocean species – mahi mahi, yellowfin tuna, sea turtles, hammerhead sharks, and pelagic rays.

The aquarium is there, of course, because Monterey Bay itself is teeming with marine life. The bay and the waters around it are an enormous marine reserve, so we took advantage of the sunny weather to scuba dive in the kelp forests of the bay. We even saw a sea lion while underwater!

Topside we saw a ton of marine life, too. My favorite animals to watch were the sea otters as they banged open shellfish to eat and took care of their fluffy babies:

Two otters in a hurry, kicking up a wake!

Monterey is at the northern end of the Big Sur coast, with its stunning cliffs, roaring surf, and undeveloped hills. While there, we rented a car to see some of it and to go hiking in this beautiful area. 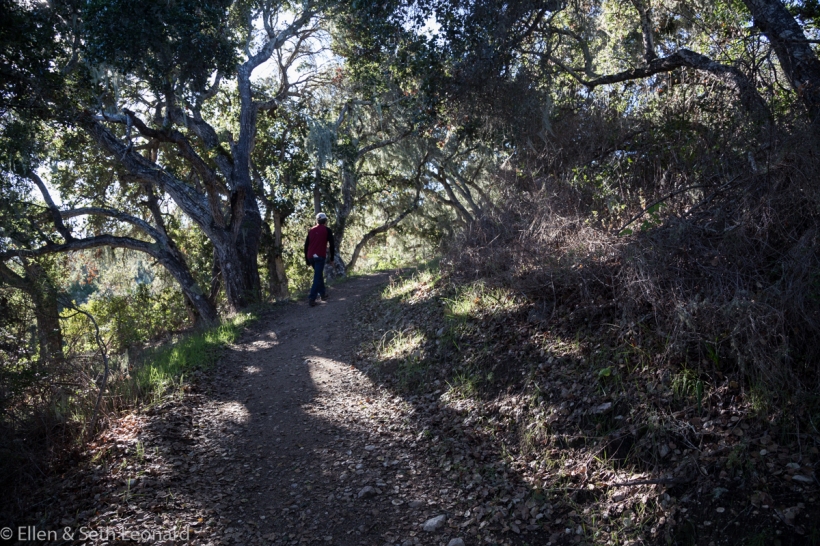 All too soon, however, it was time to leave CELESTE in the care of the very thoughtful OCC Port Officers we’d been in touch with. The Ocean Cruising Club has a fantastic network of volunteer sailors around the world who, as Port Officers, help out fellow OCC members passing through their region. Grant and Amelia were a wonderful couple to meet and get to know and we felt confident leaving CELESTE in their care while we left for work, other things, and visiting family.