A huge thank-you to all of you who donated to Seth’s cancer fund-raising campaign at http://mobro.co/sethleonard!  We really appreciate your support!

Back to catching up on the blog!

We last left off with a wonderful but cold 4th of July on St Paul Island in the Bering Sea.  The next day the weather gods added torrential rain to the mix so we spent an uneventful 24 hours: we had our fishermen friends over in the morning, went for a rain-soaked walk in the afternoon, and attended to little things: re-filling our heater’s fuel tank, printing our 4th of July photos to give to the people pictured, mailing letters (yes, they have a post office on St Paul), and listening to the (bad) weather forecasts. For dinner I cooked the halibut Terence had given us, which was predictably delicious!

Breakers seen from the clifftops

Fog replaced the rain the next day, so we tramped over to the cliffs again, bent almost double into the wind and swirling dust. (A fun fact about this part of the world is that 35 knot winds don’t necessarily disperse fog….)  Not many birds were about – the smart little guys were in their burrows – but we did see an Arctic fox fairly close up.  Too dusty to get a photo, but wonderful to see – my first Arctic fox!

Unlike in the Aleutians, foxes are native to the Pribilofs but are sadly in decline: according the IUCN Red List, “Misinformation as to the origin of Arctic Foxes on the Pribilofs continues to foster negative attitudes and the long-term persistence of this endemic subspecies is in jeopardy.”

Back in the village, we stopped to see our new friend Alison the bird guide, who didn’t have any clients because their plane couldn’t land in the strong winds and bad visibility.  She suggested we all drive around the island in her van.

She took us first to her favorite place for seeing Least Auklets, where we promptly got the van stuck in the wet sand and had to use flat bits of driftwood under the tires to get it out.  There were lots of cute little auklets, though! 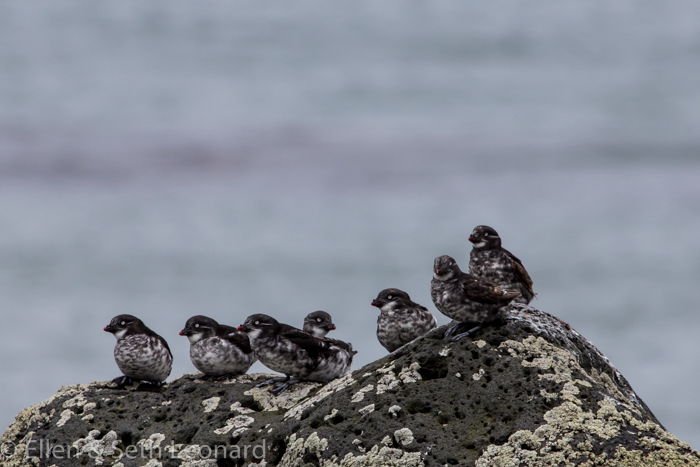 Once out of the sand, Alison drove to the southwestern point of the island where the full fury of the wind beat the sea into tremendous breakers:

but where we saw lots more fur seals (and a Steller sea lion in the mix), kittiwakes, fulmars, and (through binoculars) two harlequin ducks and (fun rarity!) a King eider offshore.

The ground was covered in lovely (and evidently hardy) springtime wildflowers, reminding us how short summer is up here.

But our best sighting was an Arctic fox! On the Pribilofs they’re all blue-morph foxes, not the white ones you think of when you hear “arctic fox”.  He was still molting his winter coat.

Alison told us about the negative feelings people on the island have about the foxes and how they’re a bit harassed, which of course lines up well with the IUCN’s assessment (see above) of how this subspecies is in some danger.

Leaving the southwestern cliffs behind, we drove past a sandy beach covered in fur seals

and then turned inland to a strange volcanic valley, nicely sheltered from the wind.  Here we all started looking for shore birds and were rewarded with a sighting of the most adorable rock sandpiper chicks! They couldn’t have been hatched more than 2 days earlier.

We ended our trip with a foray out to the far eastern end of the island (it’s not a terribly big place, St Paul…) where there’s a lake and marshes.  As Alison predicted, we found green teals and long-tailed ducks (oldsquaws). On our way back to the village we detoured out to the base of St Paul’s highest hill where volcanic rocks provide some shelter for the snow buntings and gray-crowned rosy finches we spotted.  Then it was back to the boat for beers and chat.  Another very good day despite the wind and fog!