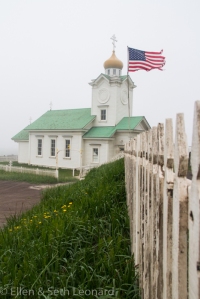 Despite our late night on the fishing boat after our day of watching birds and seals, we were up at 9AM on the 4th, wandering around town and wondering if anything was going to happen for the holiday. The whole place seemed asleep. The fog was back and the wind was blowing like mad – at least 25 knots, even in the harbor. Winds this strong have a tendency to blow out our stove-type heater (not a huge problem since we also have a forced air heater, but an inconvenience) so we wanted to visit the little local store to buy some bits and pieces to construct a wind-shield for the chimney. We found a sign on the door saying the store would open at 11, so we came back then and promptly returned to the boat to do our project since (still) nothing was happening about the 4th.

But just as we were finishing up and testing the heater (which no longer got blown out – success!) we heard sirens. The parade! We hustled across the windswept expanse of dirt between the harbor and the village and saw quite a substantial parade descending the hill past the cemetery, about to come into town!  It was much larger than anything I’d imagined would happen on little St Paul.

Then I noticed that there were only three spectators! The two of us and the sweet village crazy man waving his flag next to us. That’s because the entire population of St Paul was in the parade! But it was a great event, with lots of honking horns, decorated trucks, an all the emergency vehicles on the island – fire trucks, ambulance, and police.

After a turn around town, they ended back by us at the ball field which the fire engine hosed down as an attempt to tame the omnipresent swirling dust.

Then commenced the activities. An MC dressed as Uncle Sam shepherded everyone through toddler races, three-legged races, buoy races (yes, buoy races – the kids sat on mooring balls and bounced their way across the field), and tug o’ war. The dust was swirling again by this point, the temperature couldn’t have been more than 45 degrees F, and everyone was wearing several layers – one woman was in a full length down parka – but I don’t think I’ve ever seen people enjoy the Fourth more! Wonderful!

Tug o’ war, down jackets, and kids on buoys

By this time Ralph had arrived so we chatted with him and with a few others. We saw two young people off to one side and so we were soon chatting with them – one was a graduate student doing bird research for Alaska Fish and Game and the other was an undergraduate at a college in Maine (Seth’s home state) who had a job guiding birders on St Paul all summer.  Alison the bird guide was great fun, so we invited her to see Celeste and have a snack.  We’d all been invited to join the locals in their Independence Day feast, but that wasn’t to happen for another couple of hours.

After having added a sailing goal to Alison’s already long list of life ambitions, we went back to the ball field to watch the pie-eating contest (yes, someone barfed…) and then to partake of the feast.

Somehow the pie-eating spectacle and the crunchy bits of dust in the burgers and mac-and-cheese didn’t seem to dampen our appetites and we sat there shivering, chatting, eating, and going back for brownies and watermelon slices (Alison hadn’t seen anything fresh – not even an onion – for weeks and we’d eaten most of our veggies from Unalaska).

Then it was finally time for the greasy pole competition! Everyone had contributed to the prize pot (which came to $700 in the end), and several dedicated young men (and one very small girl) tried again and again to reach the top of a tall pole thoroughly slathered in Crisco.

About an hour later, someone made it!

Most of the locals had long since retreated to their heated cars and trucks to watch the festivities through the windshield, so by the end Alison, Seth, and I were pretty ready for some heat ourselves. Alison told us about her retreat in her building’s boiler room where she goes to warm up…. and Seth and I were soon boiling water on our heater to bucket-shower away all the dust.

Despite the cold and dust, though, St Paul 4th of July was really tremendous fun! Probably one of the best 4ths I’ve had!

11 thoughts on “Coldest 4th of July ever! Independence Day on St Paul Island”