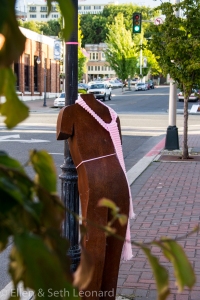 A street in Port Angeles

Since our projects on Celeste took so much longer than Seth and I had expected (we often have this problem, we should change our expectations!), we ended up working pretty much every day for a month from 7am to 7pm and often more hours. We both actually enjoy doing boat work: it often means a puzzle that needs a creative solution; it’s a great feeling to know your boat inside and out; and it’s always satisfying to fix up your home and make it the best you can. What we don’t much enjoy is the stress of having to do all the projects within a certain time frame, exactly what we’d inadvertently done to ourselves in Port Angeles. Fortunately for our sanity, we had a couple of welcome diversions from work.

Although we want never to have to use our shotgun, it’s a good idea to know how should the occasion ever arise. So we took a good long lesson from Olympic Gold Medalist Matthew Dryke at Sunnydell Shooting Grounds about twenty minutes by road from Port Angeles. He’s an excellent instructor and at the end of our afternoon there we were hitting most of our clays. Shooting clays is not quite what we’re planning to do with our Mossberg, though, so we took lessons from my cousin – who shoots competitively and came up to visit for a weekend from his home near Seattle – in firing rifled slugs. The recoil was obviously much more intense than with bird shot or even buck shot, as was the report, but both Seth and I got fairly comfortable with it by the end.

Our other diversions were much more of the sort we usually go in for: hiking and visiting with friends. Our good friends Karl and Rachel came to visit one weekend in the middle of the work and were a tremendous help. What we got done in that day would have taken Seth and me alone probably three. The next day was Seth’s and my only full day off over the whole month. The four of us went out to Sol Duc Falls in the rainforest area of Olympic National Park and after walking to the roaring cascades we hiked up to a lake for a picnic in the sun.

It was still early in the year so the patches of snow turned into solid snow cover the higher up we got and eventually we lost the trail completely. We had come so close to the ridge, though, that we decided not to abandon our hike but to scramble straight up through the snow. We were rewarded with a spectacular view of Mt Olympus’s glaciers and also with a bit of a wet slide back down. . . . 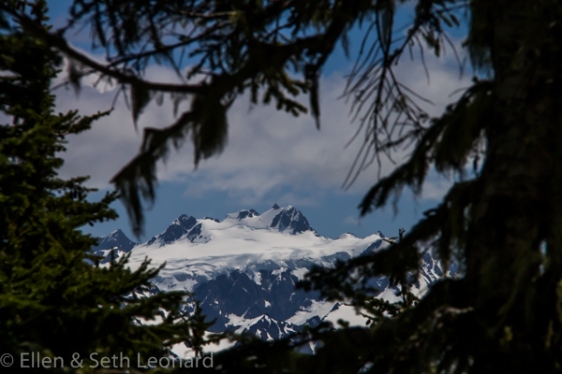 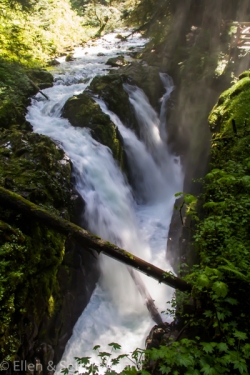 Hiking with friends in the Olympic National Park

We all had a great time, though: the best part for me was seeing Karl and Rachel again after a couple of years. We’d met them in Bermuda at the end of our circumnavigation and in the middle of their voyage aboard their sloop Sophia from Mexico to Norway (and eventually back to Seattle). The four of us had similar experiences with fixing up old boats and also similar motivations for ocean sailing, so we hit it off immediately.

Bermuda, where we first met Karl and Rachel aboard s/v Sophia

That only deepened with common interests in the natural world, backcountry skiing, renewable energy, and in the types of books we read. During their year in Norway they came down for a few days’ ski touring with us in Switzerland. We did what I think is the most spectacular part of the Haute-Route trail, staying in Alpine Club huts along the way. We hadn’t had the chance to see them since then, and you never really realize how much you miss certain people until you’re with them again. 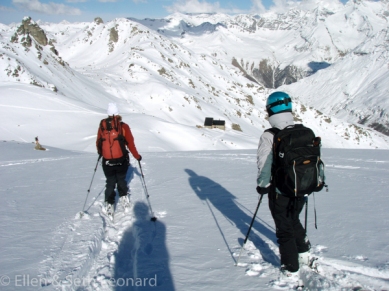 Rachel and Ellen spot the hut 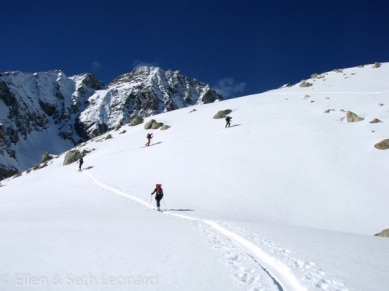 Karl on a gnarly ladder…

We were sorry to see them go, but solaced ourselves with a couple half-day excursions back to the Olympics. The Park is probably unique among America’s National Parks in that it encompasses so many different ecosystems: the rainforest, the coastal beaches with their rock pillars and tide pools, subalpine meadows and forests, and high alpine glaciated terrain. Seth and I would have liked to have seen it all but we obviously had to pick and choose. One evening Seth and I headed out to Crescent Lake to see the hourglass-shaped Marymere Falls and also to hike up Storm King Ridge and get a view of the long, mountain-rimmed lake and the Strait of Juan de Fuca beyond. The hike started in the old growth rainforest and moved up into denser but smaller trees before coming out on a rocky outcropping. 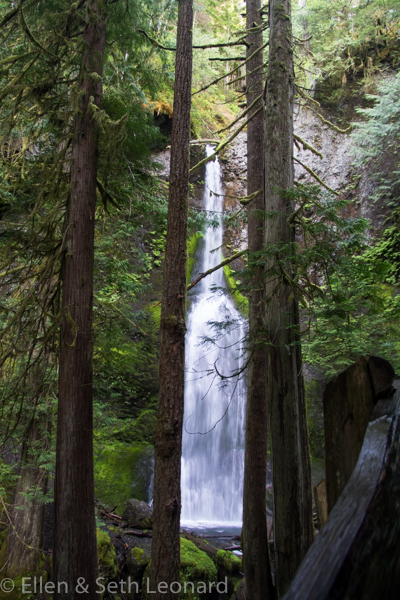 On our only other excursion into the Park, we began in the subalpine fir forest and meadows that cover Hurricane Ridge behind the town. The ridge offers an incredible view of the highest peaks, including Mt Olympus and its glaciers. We’d come early in the morning hoping to spot wildlife and were amply rewarded. The black-tailed deer seemed completely unafraid, grazing in the meadows and the trees. As we started to come up above the woods we happened to look down into a hollow with a small pond and saw a black bear! We watched him until he’d ambled downhill out of sight. The rest of our hike was filled with marmots coming out of their burrows alone and in groups and looking as hilarious as marmots always do 🙂 We also got to see a bunch of beautiful wildflowers since it was still spring up high. We were, of course, sad to have to head down the mountain but excited for the equally beautiful landscapes ahead of us on our sailing voyages! 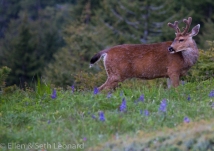